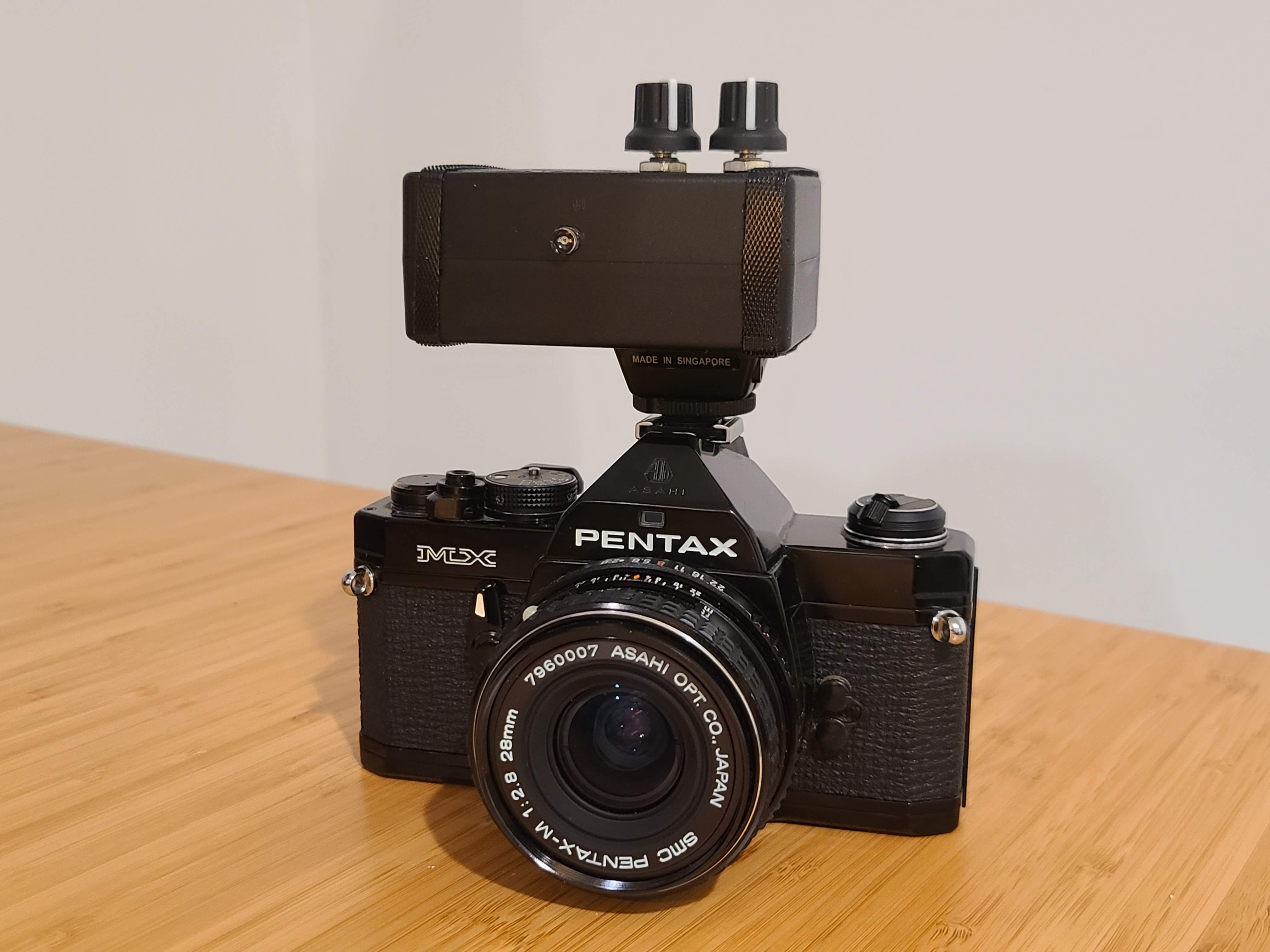 It’s been a while since I worked on a tech-related personal project.

During the holidays I picked up an Arduino-like board, to play around with.

I was wondering what project I would have fun doing with it, and decided to combine it with another hobby I picked up last year: photography and film photography.

A digital camera stores all kinds of metadata alongside each picture it takes. Arguably the most important metadata it stores are the exposure settings that were selected when taking that picture (aperture, shutter speed, ISO).

An analog film camera typically doesn’t store any of this information. Some photographers carry around a notebook where they write the exposure settings for each picture they take.

Moreover, most film cameras include some electronic circuitry to determine the amount of light in the scene and help guide the photographer in picking the aperture and shutter settings to produce a correctly exposed picture. Many old film cameras, while still being mechanically working, have a long dead light meter.

I never take notes, and all my cameras have working light meters. But I needed an excuse to start a project, so here I am.

See it in action

Below is a short video where I demonstrate the usage of the device: I create a roll and save a couple of frames.

The full source code for the film memo device can be found at https://github.com/alesgenova/film-memo.

While the nominal price of the parts is about $40, realistically I spent almost an order of magnitude more once you factor in extra parts bought for testing or to account for possible mistakes and the tools needed (soldering station). At least now I have plenty of spare parts for future projects.

It definitely turned out more expensive than a similar (and probably better) device I could have bought off the shelf.

The rest was written from scratch: 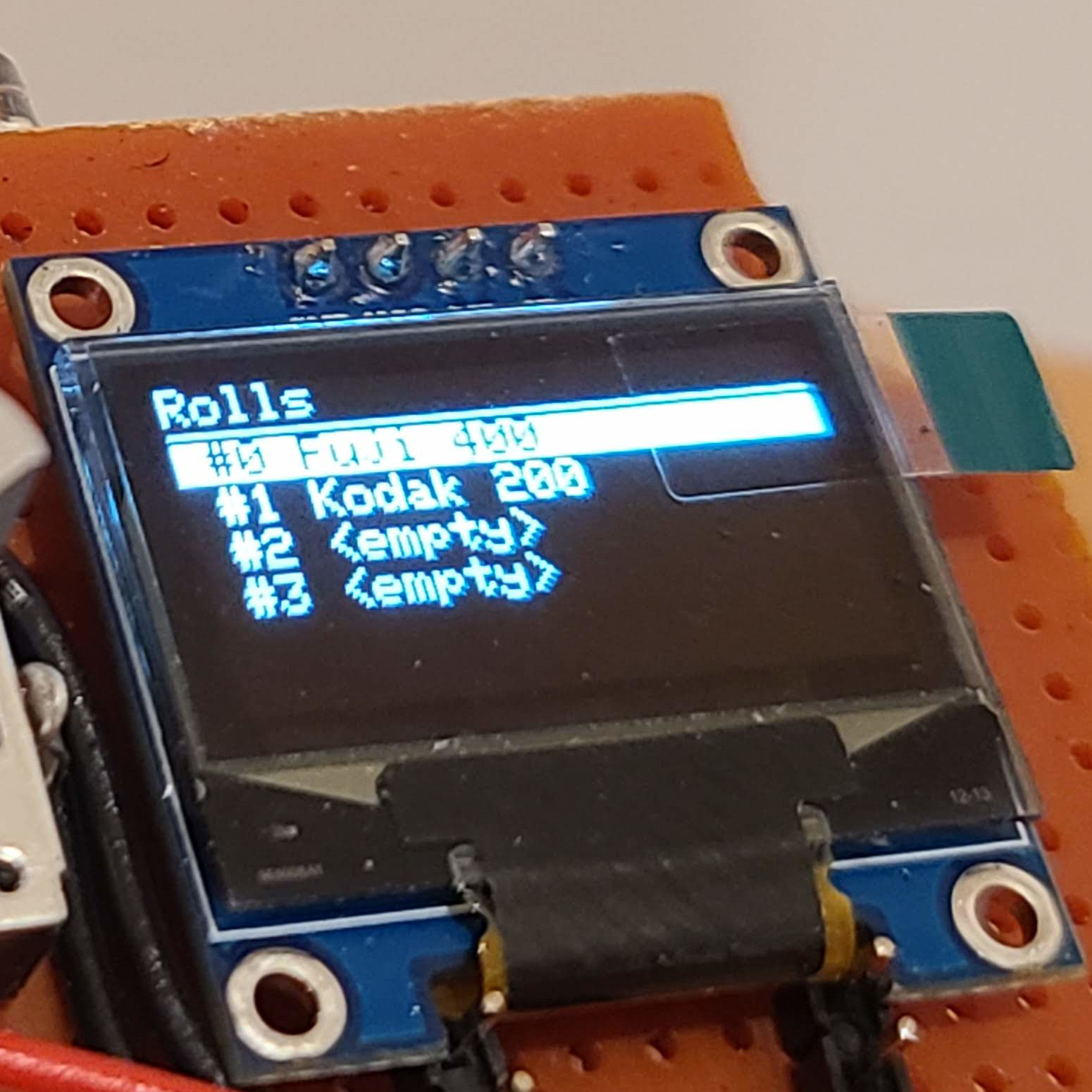 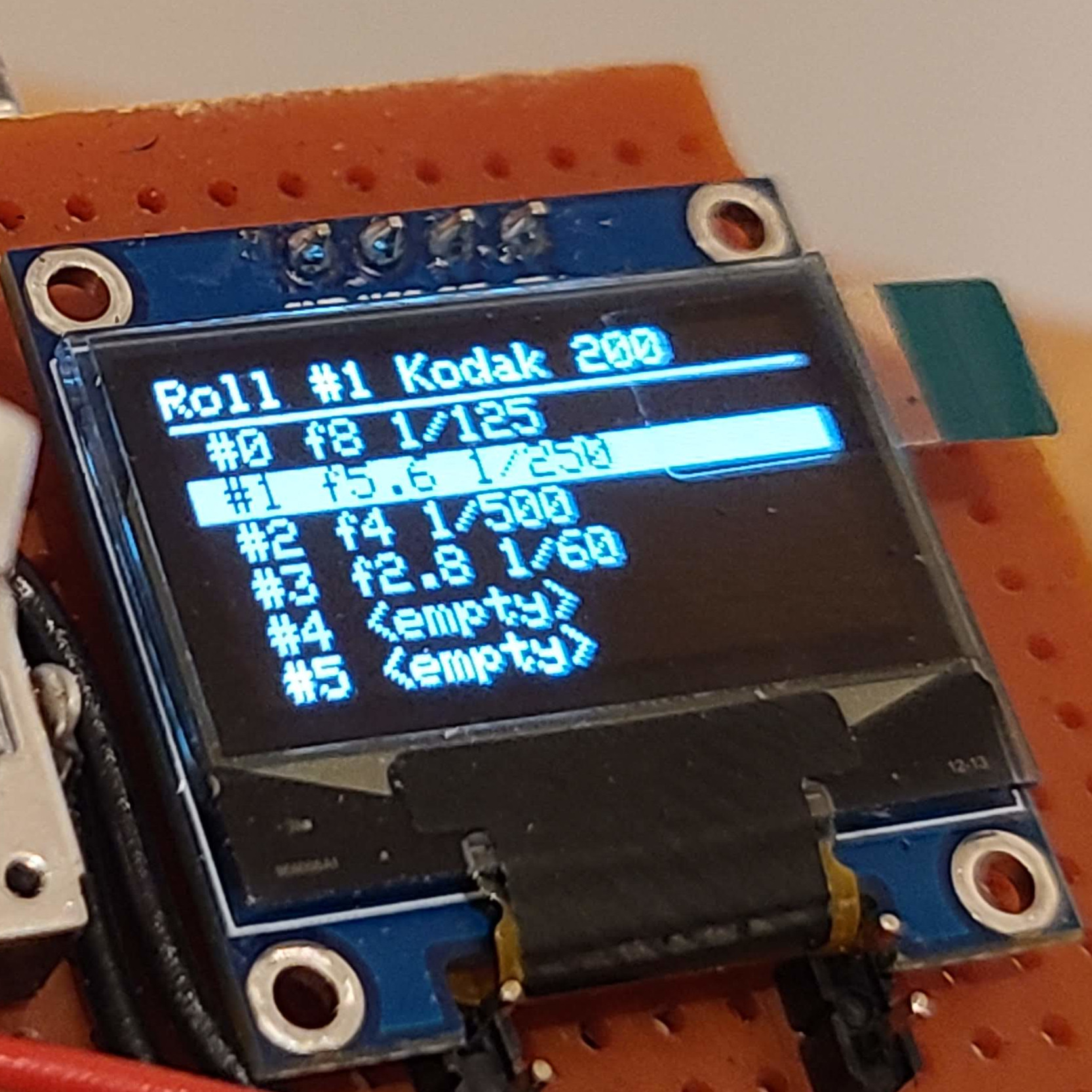 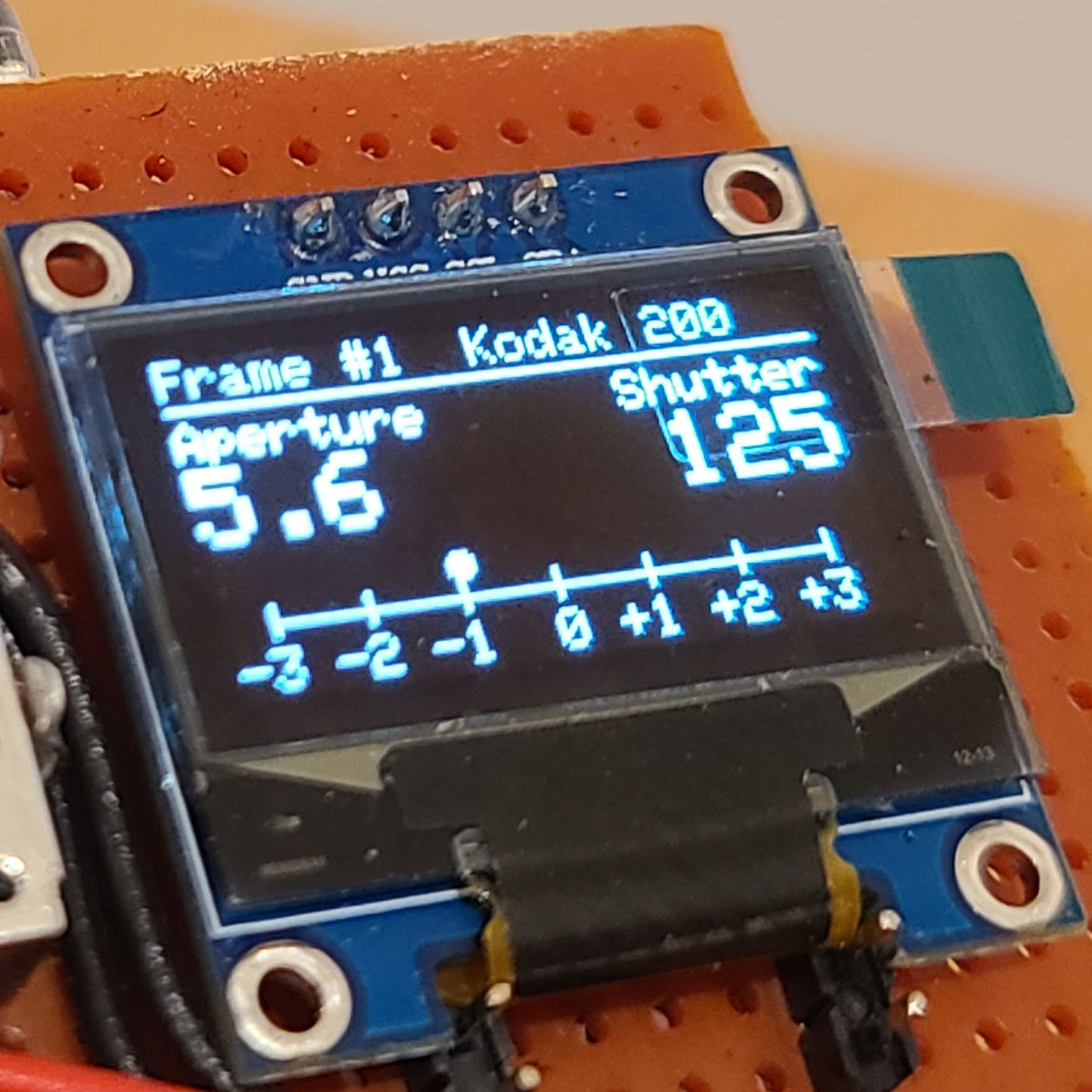 By the end of the project I started hitting the limits on both RAM and Flash.

On the RAM side I was able to achieve the biggest optimization by reworking the Frame struct. Since each Roll of film has 36 Frames and there can be multiple rolls in the app, Frames take up a large portion of the available RAM.

In my initial implementation of the Frame struct, I had two member variables enums to represent Aperture and Shutter. The sizeof() this struct is 4 bytes.

By refactoring Frame so that it has a single uint8 member variable, and by providing getter/setter member functions that take/return the enums and using bit masks and bitwise operations I was able to reduce the sizeof() of the struct to 1 byte.

On the program size front things were not any easier. In its current form the application uses 28,588 bytes out of the 28,672 bytes (99.7%) available on the board. I had to convert some templated classes into non-templated classes to save a few bytes here and there. I’m not sure how to reduce the binary size any further, if I want to add new features in the future.

I did solder a few times in the past and I was never good.

At the beginning of this project I hit a new low in the quality of my soldering, and briefly considered giving up.

A breakthrough came when I switched the soldering tips that came with my iron (conical shape) to tips with a chisel shape.

It definitely wasn’t smooth sailing after getting the better tips, and working under the relatively small space constrain of the enclosure I picked didn’t help. But I did get a working device in the end.

The image below shows the wiring diagram of the main components of the device. Omitted is the circuitry for the lithium battery and its charger. 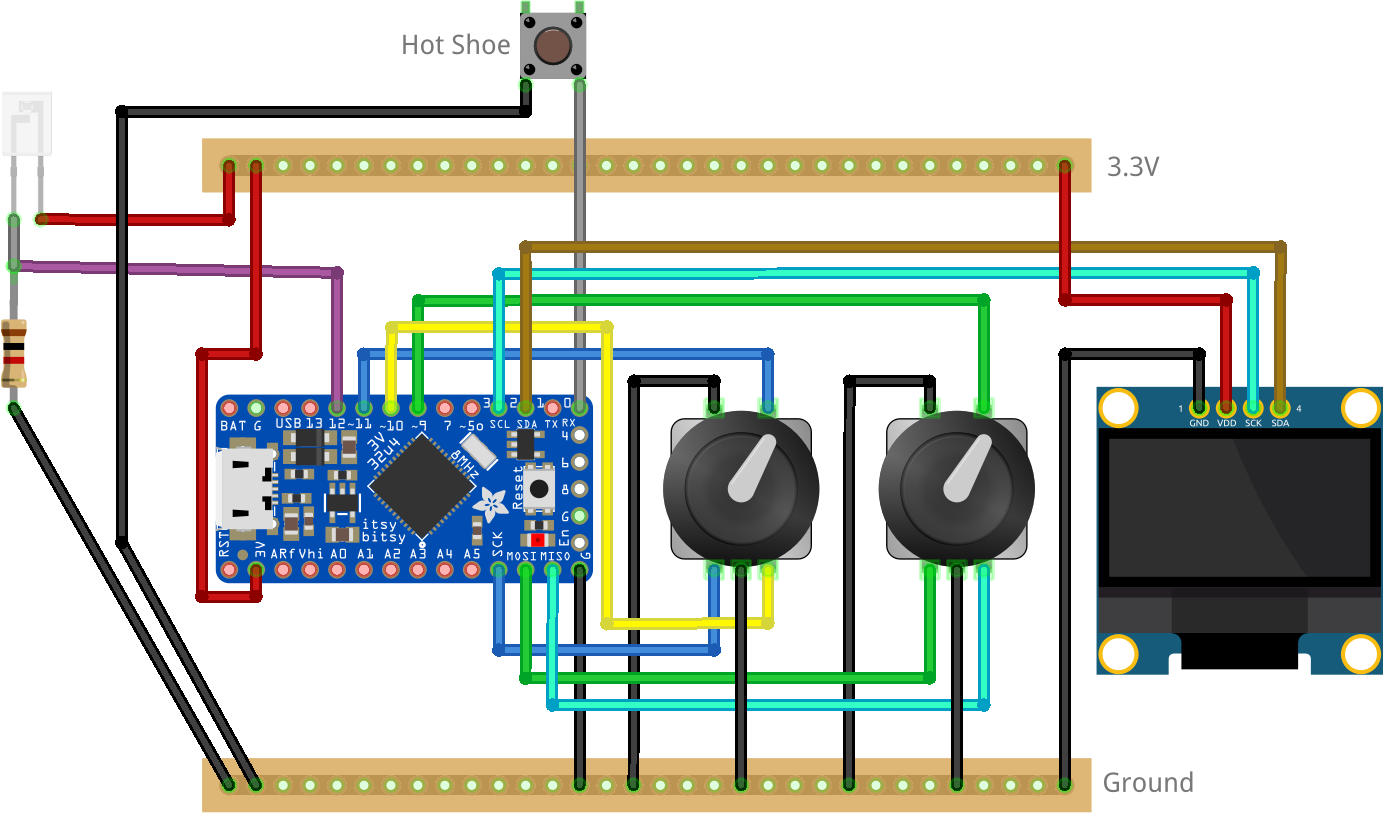 In the actual device I separated the components between to boards: 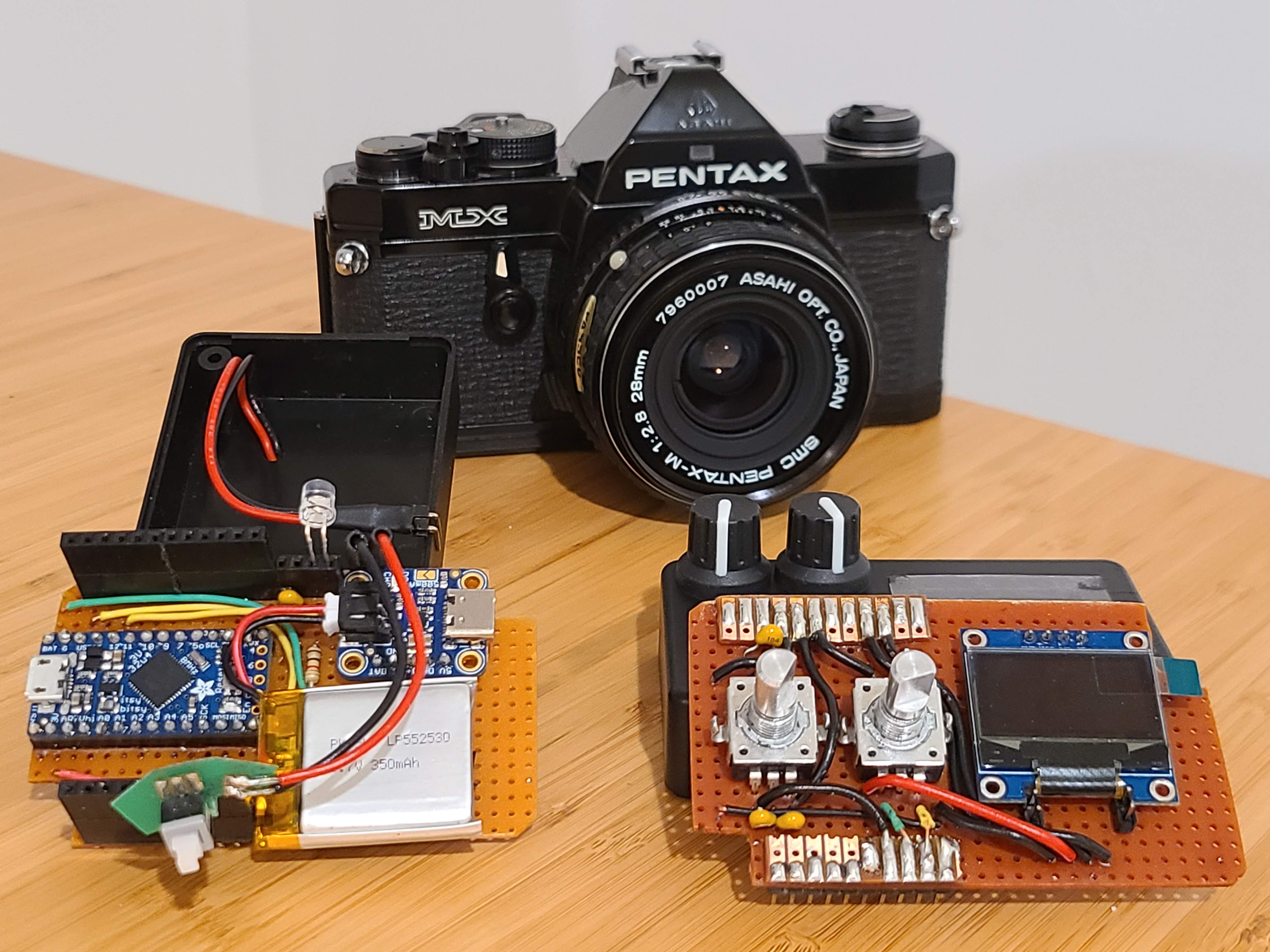 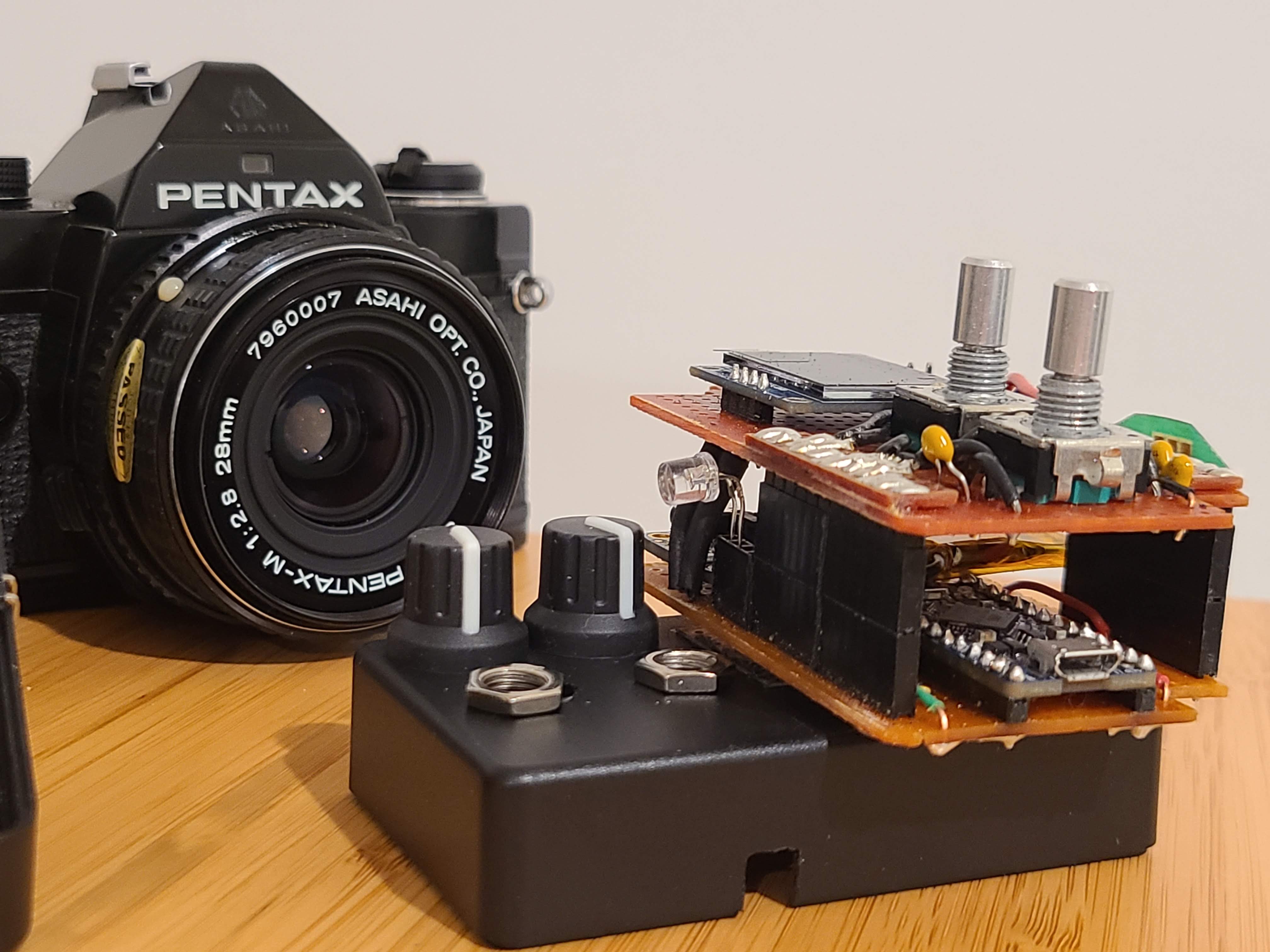 The two boards can be stacked similarly to an Arduino hat: the male/female connections between them keeps the two parts together, and the assembly fits in the enclosure by the tightest of margins.

Completing the project was fun and challenging and it taught me a thing or two.